is for TALES.  And what a TALE  this will be.  For starters;  the initial letter T started to fight and whine.  It didn’t feel that the older font I was using gave the TALE justice. It felt small, boxed in, confined.  And now that I think about it,  the letter T in its fussing; turned out to be correct.

TALES are so much larger.  I can’t and do not want to even attempt to pack them into a smaller package.

Some of the other candidates?  I will bring them in so that you can see my issues. 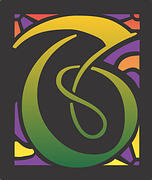 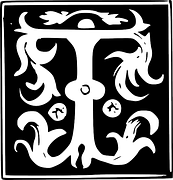 These two were in the running for a while but at the end I had to think that  TALES can not be confined to a just Celtic motif or even an old English form of swirls and texts.

And the last letter T,  I was torn because it was a color pattern that was calling to me.  The wood colors and how it was set up brought back memories of the wood shop that resided in the basement of our house.

So the moral of the TALE is to listen to your letters because they will speak to you as well. And sometimes they will turn out to be right.

Just So you Know

Thoughts and Ramblings longer than 140 characters

Stitching and a toddler, oh my!

Stitching and other Stuff

The World of Crafting